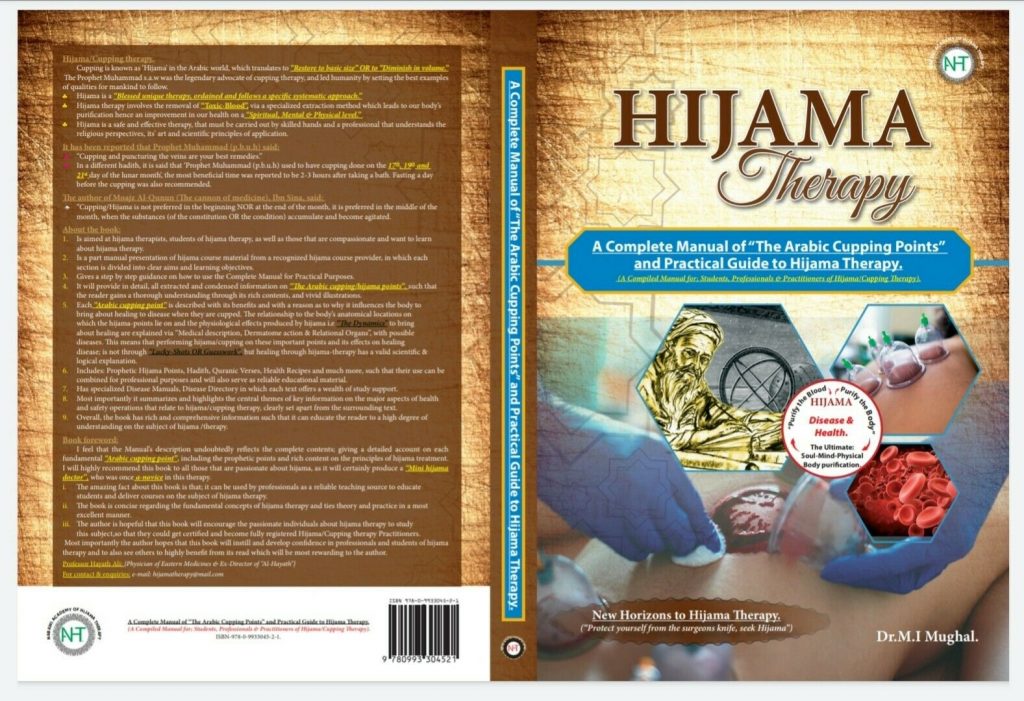 Dr. Mughal is a highly dedicated professional in the field of holistic sciences. He is a respectable teacher, lecturer & recognized professional for his work on the subject of ‘Alternative Medicine’. He is also a lead practitioner in hijama therapy and has been a member of many professional organizations throughout his academic Journey.

He has a non-stop attitude and quest for seeking knowledge for the betterment of humanity and devotes considerable time engaged in philanthropic activities, to aid the “Poor & Needy’ and the unprivileged around the globe. He has contributed much in the write-up of numerous articles on alternative therapies and has written books for, students & professionals as well as this book that has been written in the finest detail.

Dr. Mughal’s work in the write-up of his books is a product of compiled and amalgamated work from the “hijama & cupping therapy fraternity” team of contributors as well as his original work and development on this subject.

His work is fully substantiated through personal research, innovative ideas that have been coupled with long-term practical & clinical experience of over 20-years, leading him to newer findings to give the book its shape. Many friends and professionals humbly requested for such work to become available, hence compelled the author to fulfill this as his mission. Dr. Mughal’s tireless efforts have been purely to present this book as a gift for those keen advocates of hijama therapy, now presented in an accomplished form.

I feel that the Manuals description undoubtedly reflects the complete contents, giving a detailed account on every fundamental “Arabic Cupping Point” including the prophetic points backed up by rich content on the principles of hijama treatment. I will highly recommend this book to all those that are compassionate about hijama, as it will certainly produce a ‘Mini hijama doctor” who was once, “a-Novice’ in this therapy.

Not only that the book would benefit a student but it can be used as a reliable teaching manual for delivering hijama/cupping courses. The book is concise in regards to the fundamental concepts of hijama therapy and ties theory and practice in a most excellent manner. I am certain that many will derive benefit from its read which will be most gratifying for the author.

I met Dr. Mughal at ‘Father Muller Homeopathic College’, in Mumbai in March of 1998 and we spent much quality time talking with one another on health related therapies.

He seemed to be a very enthusiastic individual and depicted a lot of comprehension in the field of elective medication. He requested that I sign-post him in finding valid writing and quality research work that had been finished by the experts on hijama treatment.

This reason and requirement for direction, was for him to fill a more prominent need which was to make, a more noteworthy attention to hijama treatment in the public arena and for it to be advanced. Hijama treatment was minimal known to individuals, so he was energetic about restoring this inert however honorable treatment. Dr. Mughal revealed to me how he at first built up a distinct fascination at an extremely youthful age which was watching his grandma putting hijama energetically for minor sicknesses to the major every day. Obviously she was an extraordinary master and healer of diseases utilizing hijama on the nearby residents, henceforth turned into his most prominent persuasive figure since early on.

The opportunity had arisen in June of 1998 for Dr. Mughal, when I invited him to attend together a seminar in Lucknow on ”Blood-Cupping & Leeching, which was led by Professor P.S. Jamal Uddin of South Africa. He delivered a lecture on this subject that was extremely fascinating and inspirational, rich in information on its roots and its connection with Islamic cupping thereafter, much was shared between us following this talk. The inspirational lecture became a transitional phase for Dr. Mughal, finding a way to embark on a new project and commence a life altering journey; purely to develop something far greater on the subject of Islamic cupping.

He began to network with many likeminded individuals that were brought to his acquaintance. His endeavor to bring to limelight, this powerful “Sunnah Therapy” had become a turning point, as he liaised with many eminent scholars and professionals that were to navigate him to achieve his objectives. Dr. Mughal devoted much time and effort with a team of like-minded individuals, who shared a similar bubbling spirit and delving minds into research and development on this subject.

After many years and many quests his work eventually took the shape in producing many books on hijama therapy. The books written by Dr. Mughal are a culmination of a life-time of individual research, and study that has been combined with clinical practice. A professional gentleman who has sacrificed much to find a way of healing others and has dedicated over two decades of life force for a larger goal and truthful purpose in extending the realms of hijama therapy for the new and exciting.

I feel that the contents of the book and manual description in its entirety reflect the book title and its purpose for all its advocates. I will regard it as an excellent read for both students & professionals, as it highlights with detailed insight to the concept of The Arabic Cupping Points”. It is yet another worthy offering that Dr. Mughal makes at the altar of truth regarding hijama/cupping.

I salute him for the fruitful partnership that he has so long tendered, and may these pages benefit the sentient beings to make a bright start to the therapy.

To order this book, please visit the following link: